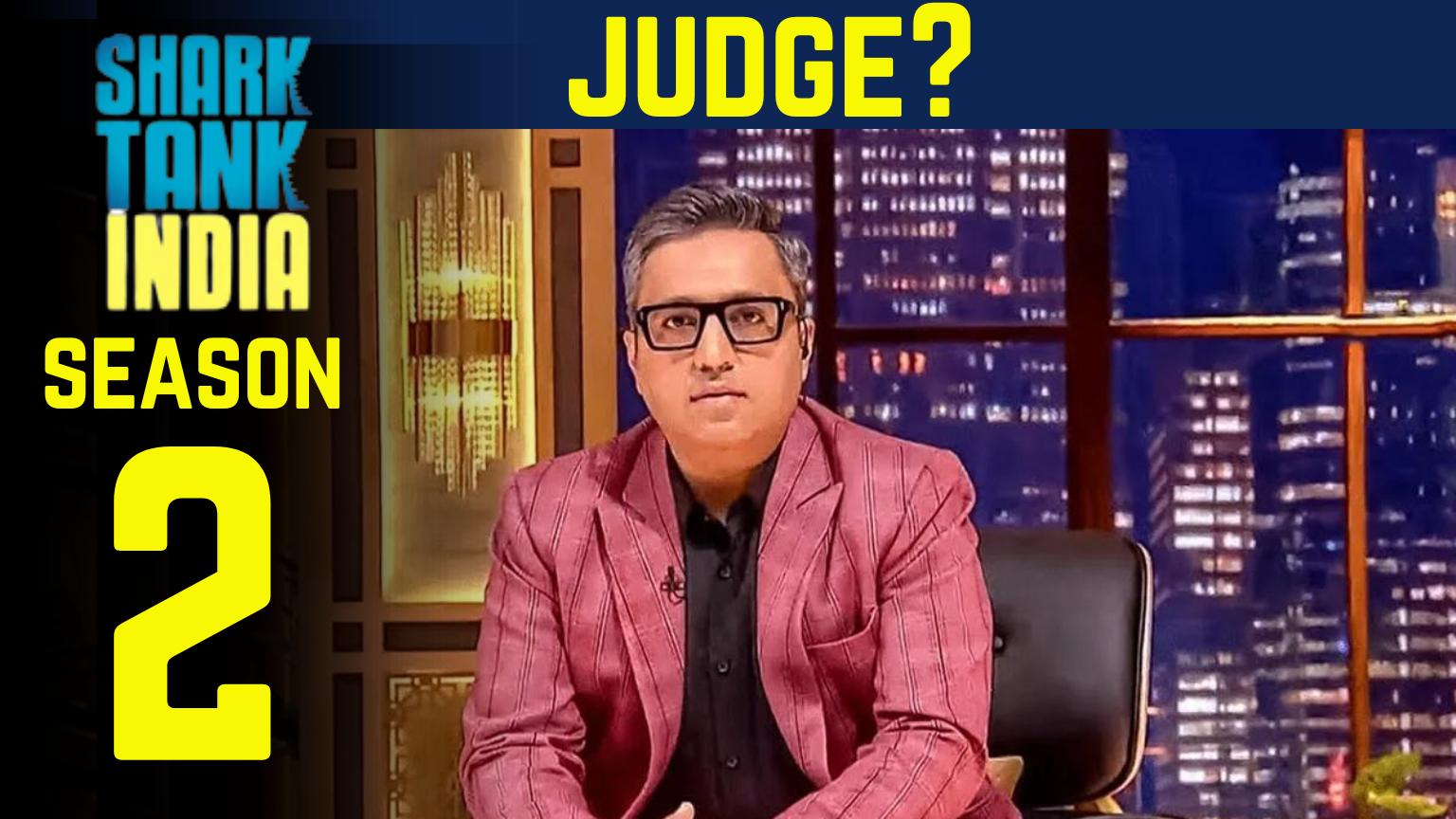 Who is Ashneer Grover?

Before being a co-founder of BharatPe, Grover worked as the Chief Financial Officer at Grofers. Grofers is a grocery delivery service that is now called Blinkit. He also has good experience working as an investment banker. From educational background, Ashneer Grover completed his degree at prestigious institutions like IIT Delhi and IIM Ahmedabad. Ashneer Grover’s age is 40. The question in everyone’s mind is will Ashneer be in Shark Tank India season 2?

Ashneer Grover, the co-founder and Managing Director (MD) of BharatPe, on Monday, 28 February, resigned from his fintech company with immediate effect.
Earlier in January this year, an audio clip of a phone conversation went viral in which a man, allegedly to be Ashneer Grover, could be heard abusing a worker of Kotak Mahindra Bank as the lender had failed to secure the funds on the Initial public offering (IPO) allotment for buying Nykaa shares. Initially, the BharatPe managing director claimed the audio to be ‘fake’ through a tweet on his social media platform. But later, he deleted that tweet. Kotak Mahindra Bank allegedly initiated a legal case against Ashneer Grover and his wife for using “inappropriate and unacceptable language” with their employees.

Then on January 19, Grover went for a “voluntary leave” by himself of being absent from the company until the end of March. He also stated at that time that he will be back on or before April 1. Later after a 10 days break, the Board of BharatPe announced to launch of an independent audit of its internal process and systems going on in the fintech firm. The board appointed Alvarez and Marsal as a leading management consultant and risk advisory firm for advising the board on its recommendations and decisions. According to the preliminary report prepared and presented by a risk advisory firm headed by Alvarez and Marsal conducted in January, found inconsistencies in dealings with the vendors. Grover, time again alleged that the governance review was handled with prejudice and a fair review was not conducted. His exit from the company comes close on the heels of BharatPe firing his wife Madhuri Jain Grover, Head of Controls at the company, with allegations of misuse of company funds and later Singapore International Arbitration Centre (SIAC) rejected Grover’s petition against the company for initiating an investigation against him.

Ashneer Grover’s co-founder also claimed that the Ashneer Grover dining table is very costly but in return Ashneer tweeted the below tweet. 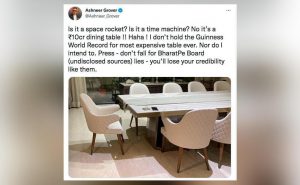 Madhuri Jain, the Ashneer Grover’s Wife and the company’s Head of Controls was fired by the company on 23 February this year following Ashneer’s controversy on charges of ‘misappropriation of funds.’ Sources who are concerned with the whole matter reportedly told PTI that she was accused of misusing company funds for her personal beauty treatments, buying electronic items, and family trips to the US and Dubai. Her removal came as her husband posted an attack on BharatPe investor Rajnish Kumar. Madhuri thereafter took to Twitter to accuse BharatPe’s CEO Suhail Sameer and co-founders Bhavik Koladiya and Shashvat Nakrani of being involved in “drunken orgies” and treating women as objects. 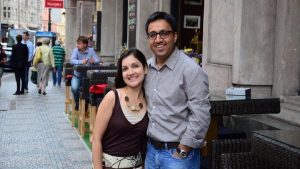 Ashneer Turned 40 And Made A Comeback

Recently the Indian entrepreneur Ashneer Grover turned 40 and celebrated his birthday with his family. He is enjoying his vacation time with his close ones. In the meantime, on his birthday he announced his comeback. People thought that Ashneer’s entrepreneurial journey had come to an end with his controversy and exit from BharatPe. But he is all set to start again.

While celebrating his 40th birthday, Ashneer Grover, hinted that he is all set and ready to build another unicorn. Unicorns are basically tech start-ups valued at over $1billion. Grover was previously associated with two other unicorns such as fintech firm Bharat Pe and Blinkit (known as Grofers).

Sharing a post on Twitter account handle, the former BharatPe managing director posted, “Today I turn 40. Some will say that I have lived a full life and have experienced more things than most. Created value for generations. For me, it’s still unfinished business. Time to disrupt another sector. It’s time for the third unicorn”. This came up after Grover became the panelist at the seventh edition of TiECon-2022 and had told The Tribune on 30 April this year that he really wished to start his own venture by using his own money and make it a profitable one. He said in an interview that he doesn’t want to go to the investors again. Grover had also said that all the alleged accusations against him come from “personal hatred and low thinking”.

Today I turn 40. Some will say I’ve lived a full life and experienced more things than most. Created value for generations. For me it’s still unfinished business. Time to disrupt another sector. It’s time for the Third Unicorn !! pic.twitter.com/wb7ZQe41FY

Despite all the high drama that occurred in Ashneer’s life in the past six months, he appears to be unaffected as he seems to have started on a new and fresh journey as an entrepreneur. He has been putting hints about his new venture after a brief period of leave. Ashneer is yet to open up on what he is planning and working on. Most aspiring entrepreneurs look up to him for his fiery attitude and business intelligence.

The recent Twitter post suggests that he might be onto something. But at this point in time, nothing substantial can be said about what company Grover is planning to launch in the upcoming times. Grover, however, had a belief that his next venture will be his third company to bag the unicorn tag again. His 40th birthday seems to appear more exciting to his followers now, as the two-time entrepreneur is all set to make a comeback. Both his Instagram and Twitter posts are receiving warm responses from his followers of the social media platforms. His co- sharks Anupam Mittal, and Ghazal have also wished him a happy birthday.

Will Ashneer be a Shark again In Shark Tank India Season 2?

Shark Tank India Season 1 has started a movement in India’s entrepreneurial environment. While the audience are patiently awaiting the next season, Ashneer’s next move is also being anticipated by his fans. People are also anticipating his journey as Shark in the next season. However, Grover is quite famous in the startup circle and he got fame and popularity after his appearance on Shark Tank India as a shark. He was one of the investors on the show. According to media reports, Grover is all set to return in the show Shark Tank India Season 2 as one of the judges.

Will Ashneer Grover be a Shark again In Shark Tank India Season 2? 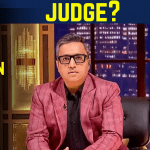 Yes, It is confirmed that Ashneer Grover will be the Shark For Shark Tank India Season 2. 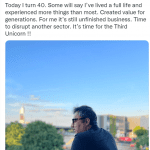 Yes, On Ashneer Grover’s 40th Birthday he announced that he is starting his new venture.

What is the price of the Ashneer Grover dining table? 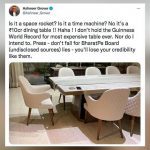 Ashneer didn’t reveal the price of his table but he cleared that his table is not worth rs 10Cr with a sarcastic tweet.