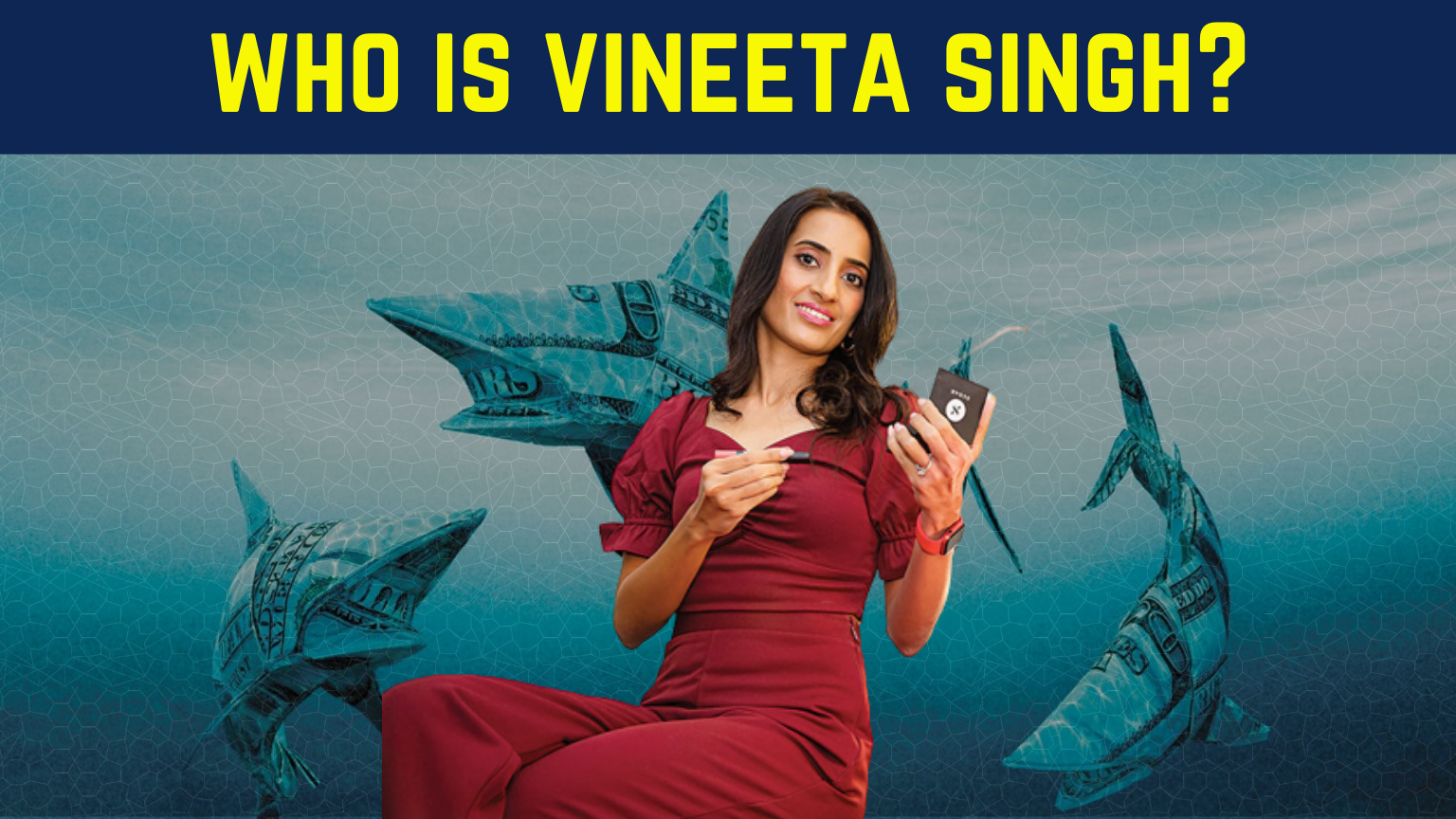 Vineeta Singh is an Indian Co-founder & CEO of SUGAR Cosmetics, India’s one of the fastest-growing makeup brands in India. Vineeta Singh’s TedTalk speech has influenced many women entrepreneurs. She is an alumnus of IIT Madras and IIM Ahmedabad. She is also a triathlete and ultramarathon runner. She is now all set to judge Shark Tank India, the first season of Shark Tank business reality show in India along with other sharks.

Vineeta Singh, the only child of her parents, was born in a small village Anand in Gujarat. Her father as well as her mother were doctors. They both inspired Vineeta from a very tender age to do excellence in her career. Vineeta used to see her father work in the AIIMS laboratory from day to night even after dinner. Her father wanted to invent the best protein in the world which can cure cancer and many other critical diseases. Vineeta was brought up by her Nani in the Bhavnagar of Gujarat. Then they shifted to the capital city Delhi as her father got a chance to work with AIIMS and her mother at ICMR. Her father was her inspirational hero as Vineeta also wanted to do something which not only this country will know but the whole world would clap for her success.

In an interview, Vineeta said, “We both studied together at IIM Ahmedabad and both of us interned at investment banks and started our own startups before joining to work together. I am keenly interested in consumer businesses targeting especially women and Kaushik was excited to build an e-commerce company. So, a digital-first beauty brand turned out to be a wonderful overlap of both of our interests.

All together they both decide to fulfill their mutual wish of running an e-commerce company. While Vineeta took responsibility of the finances of their venture, while Kaushik looked after the technological works and other operations. Managing these different works of their company together has helped both to contribute towards the common cause without much disagreement.

Sugar, founded by IIM graduates Kaushik Mukherjee and Vinita Singh, stepped into markets as an online brand made for women’s cosmetics and they sold their products on some online platforms such as Amazon India and Nyeka . This e-commerce site is operated by Velvet Lifestyle Private Limited.

The couple is also blessed with two baby boys. In an interview she spoke about how being new parents and managing a startup can be quite stressful. Presently, her mom and husband take the maximum duties for the children.

Vineeta has a great interest in running marathons. She started running long distances many years before and has run more than 14 Marathons and a Full Marathon of around 42 kilometers.

While taking part in Ultra Marathons, she ran for the race called Comrades, which is an 89 kilometers ultra long-distance race, held in South Africa covering five rolling hills that should be covered within 12 hours. It’s the world’s biggest and most ultramarathon race and Vineeta has done it a number of times. She even won a bronze in one of the races.

This sugar cosmetics founder has also taken part in the Iron Man Triathlon along with her husband Kaushik, where it’s 3.8 kilometres swim in open water, followed by a 180 kilometres bicycle ride, finally finished by a 42 kilometres run, all within 17 hours.

There have been various other Half Marathons and Triathlons held in India in which she had taken part and even secured several positions also.

SUGAR Cosmetics is an Indian cruelty-free makeup brand. The company’s headquarter is present in Mumbai, Maharashtra, India. Sugar was founded in 2012 by Vineeta Singh and Kaushik Mukherjee. It is a brand typically high on style and performance. The brand is motivated by and objected towards bold and brave, independent and determined women who break the stereotyped norms in society.

Presently SUGAR cosmetics is a premium, classy and sophisticated, and one of the most loved make-up brands amongst middle-aged women and young girls with a net income of over INR 200 crores. It’s a new-age beauty brand in India cosmetics that focuses on the individuality of the Indian skin tone.

It is quite exciting about the brand that its products such as sugar cosmetics lipsticks are trendy, more lasting, high on style and performance, especially “Matte liquid lipsticks and Matte bold eyeliners”- is leading an amazing upsurge in the cosmetics industry.

Today, SUGAR cosmetics is currently working with a broad team of 1,450 strong employees. For more development, the company is providing training to around 1,000 business associates on more than 60,000 products, with over 60,000 training videos and at least 40 online quizzes to improve their skills.

This Mumbai-based company was making monthly Rs 5 crore to Rs 10 crore from per month sales by January 2020 and had crossed the revenue target of Rs 200 crore this year.

One major decision can change your life. This has been proved by Vineeta Singh when she turned down a 1 crore package placement offer from Deutsche Bank, which is one of the most recognized banks internationally. She received this offer while she was studying at IIM Ahmedabad.

There was a lot of pressure on Vineeta to accept this offer by her family and relatives. The decision was really tough for her. It was 2007 when she turned down that job offer. That was a time, startup culture was not so evident. It was tough to reject such an amazing offer and take risk for a startup. But she did it, forgetting about family and relatives and setting an example for her batchmates and rest of the society. today is an inspiration for the generation, for all the women entrepreneurs.

The named media houses were astonished to know that such a young girl at the age of 23, left the job offer of a global investment bank of a whooping salary of 1 crore. For such a big step and big news Vineeta even got featured on the cover page of WEEK magazine. She was possibly the youngest B-school graduate to decline such a big offer. knowing the fact that it is the biggest risk she has taken in her life ever, She did not change her mind.

Finally, she founded SUGAR Cosmetics in 2012 along with her husband Kaushik Mukherjee who is also the co-founder and Chief Marketing Officer of SUGAR. In 2019-20, the startup estimated a whopping revenue of Rs 100 crore. It all occurred when the cosmetic industry was ruled by big names like Lakme, Loreal. SUGAR cosmetics provide customized products which are suitable for Indian skin tones. Sugar brand Lipsticks and eyeliner are the signature and most loved products of the company.