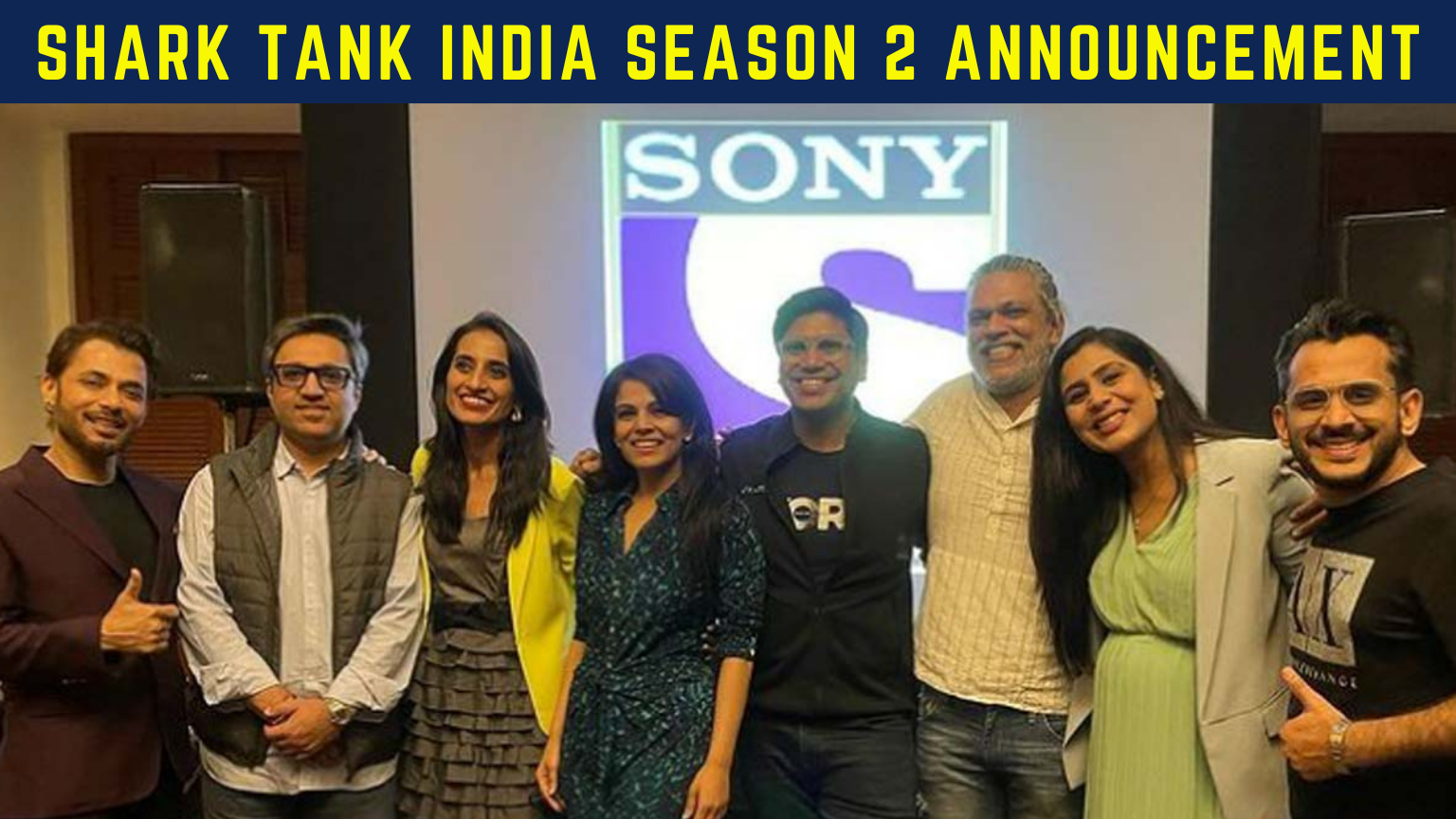 The very first season of Shark Tank India has recently telecasted its last episode. With such huge recognition and extraordinary pitches, the creators have planned to start the next season i.e. Shark Tank India Season 2. Shark Tank India Season 1 has received immense love and support from the audience making the show a hit. With an average rating of 0.5 TRPs, the show has successfully delivered the message to the youth, ‘the need for entrepreneurial development.

The show had 35 episodes and 63 participants, with an IMDb rating of 9/10. It has indeed amplified the startup ecosystem. This show has helped many startups get worldwide recognition, even for those whom the sharks choose not to invest in. Some of them are even on their route to becoming universal companies. We noticed all of our curious audiences are super excited to know everything that is said about Shark Tank India Season 2. This blog is going to be super beneficial for all of the startup enthusiasts out there.

As per sources, Season 2 of Shark Tank India will be telecasted similar to that of the first season, but we can already see huge feedback from audiences on what needs to be changed in Season 2 of Shark Tank India, few of them are to bring in Guest Sharks, select sharks from all backgrounds and not particularly in the field of Technology, bring back Ashneer Grover in Season 2 Shark Tank India, more post-pitch interviews, etc. The creators are planning to make it more interesting and intense and expect more deals, offers, and investments for the budding entrepreneurs in India.

Though no official notifications have been released yet, you can still make an estimate regarding Shark Tank India Season 2 and its release date and month from what has been circulating in the media and other sources.

Shark Tank America aired in 2009 and was successfully carried out till 2014. It had 13 seasons in total. There is a high possibility of Shark Tank India Season 2 and
seeing the success of the last season we can hope for a positive answer. Moreover, the audiences are looking forward to it. The show has not only entertained us with the quirky comments of Ashneer Grover or the funny reactions of Aman Gupta, or the entertaining pitches of a few of the contestants, it has taught us a lot regarding the business scenarios in India and different concepts. It has even helped local start-ups gain recognition and the Indian households have come forward in support better than ever. With so much growing vogue and backing, Sony TV is for sure planning to lift the curtains for Shark Tank India Season 2.

According to the buzzing rumors, the month of April and December came into the limelight as the expected month for the Shark Tank India Season 2 series. As we didn’t receive any such news regarding its release, there is high speculation that the show will be released in the month of December. But, the exact date has been kept a secret.

We have all our ears and eyes wide open. As soon as we get any latest news on the release date for Shark Tank India Season 2 from SonyTV officials, we will update it right here. As per rumors, the judge’s panelist will be similar to that of the first season of Shark Tank India. The sharks will be carefully examining the pitches, sharing their viewpoints and advice, and finally investing in those ideas which would entice them the most.

The judge’s panel will be shared by-

His network stands at 95 million dollars. We are not sure whether he will be acknowledged to be one of the sharks in Shark Tank India Season 2 due to the ongoing news circulating about him. The audiences are hugely demanding Sony TV to bring back Ashneer as the judge of Shark Tank India.

He is the founder and CEO of Shaadi.com. His net worth is 25-50 million dollars. He is one of India’s active angel investors.

He is the co-founder and CMO of boAt. He was one of the most loved sharks of Shark Tank India Season 1. His network is a whopping 95 million dollars.

She is the co-founder and CEO of India’s fastest-growing beauty brand, Sugar Cosmetics. She has a net worth of around 8 million dollars.

She is the Executive Director of Emcure Pharmaceuticals. Her network stands at 600 crores. She has also been one of the most talked-about sharks among the content creators.

She is the co-founder and CIO of Mamaearth. Her net worth stands at 20 million dollars. She has appeared in only a few episodes of Shark Tank India, Season One, will she be replaced in Season 2 is yet to be known.

He is the founder and CEO of Lenskart.com and his net worth currently stands at 80 million dollars. He brought a drastic change to the eyewear industry in India.

Let us see an overview of how much each of the sharks invested in Shark Tank India Season 1.

As per sources, other than the judges the show will be hosted by Ranvijay Singha. If there are any further collaborations of Sony TV relating to Shark Tank India Season 2, we will let you know as soon as it is released.

Shark Tank India Season 1 partnered with Black Dog Drinking Soda, Acko General Insurance, upGrad as the ‘co-presenting’ sponsors, Flipkart as ‘digital’ partner, Dell Technologies as ‘technology’ partner, and Cashfree Payments as ‘payments’ partner. Now, we have to wait and see who Sony TV partners with for Shark Tank India Season 2. All the updates will be regularly updated in this blog from time to time.

Who is the richest shark in Shark Tank India?

Who are the Shark Tank India Judges?