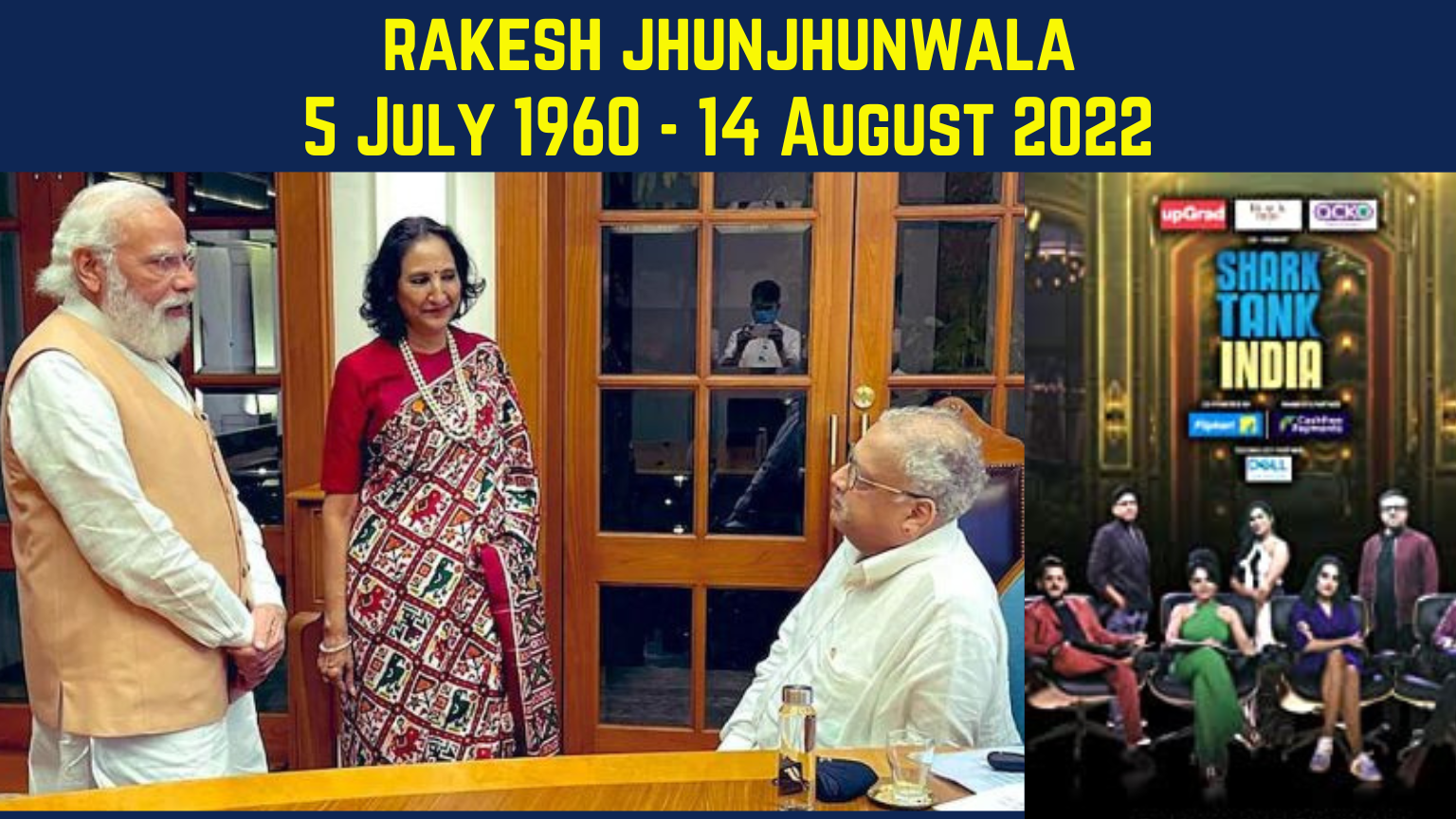 Rakesh Jhunjhunwala, an Indian investor, passed away on August 14, 2022, in Mumbai’s Breach Candy Hospital. He was 62 when died. So a regular guy from Mumbai with just Rs 5,000, later became one of the most successful stock investors in Indian history. But how did this happen? In this blog, we are going to take you through the journey of Rakesh Jhunjhunwala in the Indian stock market starting from just Rs 5,000 to over Rs 40,000 Crores and the legacy he left behind for many to get inspired. Rakesh Jhunjhunwala, India’s most admired and favorite investor

Rakesh Jhunjhunwala, also referred to as the ‘big bull’ or ‘Indian Warren Buffett’ was born and brought up on 5th July 1960 in Mumbai. His father was an Income tax officer by profession.
Rakesh Jhunjhunwala many times used to hear his father discussing the stock market with his friends. And this leads to his curiosity about the stock market. As he was very curious about all these, so once he questioned his father about why the price of stock changes daily. Then his father suggested and told him to read newspapers as it is the news that causes the fluctuations of the prices of stocks in the market. Later Rakesh Jhunjhunwala also expressed his desire to pursue a career in the stock market. However, his father told him to first complete a graduate degree from a college. Rakesh Jhunjhunwala graduated as a chartered accountant from Sydenham College in 1985. After the completion of graduation, he again discussed his career as a stock market investor with his father. To this, his father said that he can permit Rakesh to pursue any career of his choice. However, he kept a condition that he is not going to give him any money, nor he can ask for any help to borrow initial capital from any of his father’s friends for investing in stocks. In 1985 Mr. Rakesh Jhunjhunwala entered the stock market with just initial capital of Rs 5,000. At those times, Sensex was at 150 points but presently Sensex is remaining at 58,500 points.
However, soon Rakesh Jhunjhunwala was able to borrow a capital of Rs 2.5 lakhs from one of his brother’s clients. He promised to give much higher returns from stocks compared to the fixed deposits at that time. In 1986 Big Bull’s first made a big profit of Rs 0.5 million. He purchased 5,000 shares of Tata Tea at Rs 43 and by 3 months it was trading value increased and hovered at Rs 143. Then by selling those stocks of Tata Tea, he earned a profit of over 3 times more. In the next few years, Rakesh Jhunjhunwala made a huge number of good profits from stocks and made a big name in the stock market. He earned around Rs 20-25 lakhs between the years 1986 to 1989. Sesa Goa was his next milestone on the list of big investments. He bought the shares of Sesa Goa at Rs 28 and then increased his investment at Rs 35. And soon, the stock jumped to Rs 65.

Rakesh Jhunjhunwala was born on the 5th of July 5 in 1960. He was raised in Mumbai, as his father was posted there as an Income Tax Officer. He completed his graduation degree from Sydenham College in 1985, then he enrolled at the Institute of Chartered Accountants of India. Rakesh Jhunjhunwala is married to Rekha Jhunjunwala. She is also a stock market investor. This man who often was referred to as ‘Warren Buffet of India’ presently holds 32 stocks on exchanges and thus his wealth is valued based on these shares which are around ₹32,000 crores so far in August this year. Jhunjhunwala also runs a privately owned stock trading firm named RARE Enterprises. He has invested in many popular enterprises such Titan, CRISIL, Aurobindo Pharma, Praj Industries, NCC, Aptech Limited, Ion Exchange, MCX, Fortis Healthcare, Lupin, VIP Industries, Geojit Financial Services, Rallis India, Jubilant Life Sciences, many more. His portfolio consists of some of the biggest stocks. They are Titan, Star Health and Allied Insurance Company, Metro Brands, Tata Motors, and Crisil in value terms. His shares holding in these stocks is valued from more than ₹1,000 crore to a whopping ₹11,000 crore. Titan backed by Tata Group is at the top place of the pyramid in his stock portfolio. Whereas Star Health, Metro Brands, and Tata Motors are some of his latest investments. He has stood up with Titan and Crisil since 2015. And these five stocks hold for nearly 77% of his total wealth portfolio.

Below are the Details of Rakesh Jhunjhunwala’s Shareholding in These Stocks:

Apart from serving on the board of directors of some big firms like Prime Focus Ltd, Geojit BNP Paribas financial services, Praj Industries, Concord Biotech, etc. Rakesh Jhunjhunwala has also tried his hands as a movie producer. He has produced Bollywood movies like ‘English-
Vinglish’, ‘Shamitabh’, ‘Ki and Ka’. Rakesh also worked as the chairman of Hungama Digital media entertainment Pvt Ltd. There is a need for such investors in Shark Tank India so that more opportunities open up for budding entrepreneurs to grow their businesses. 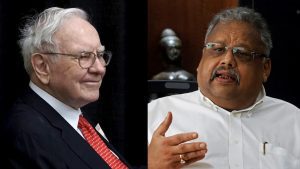 Rakesh Jhunjhunwala is extremely optimistic on India’s emerging economy and its success as a growing market. Rakesh Jhunjhunwala believes in himself as both a trader and an investor for the long term. In an interview with Economic times, Rakesh Jhunjhunwala said that short-term trading leads to short-term profit, whereas long-term trade leads to long-term gain and capital formation. Trading gives you the needed capital to invest. He further said that trading also helped him in investing and using a lot of technical analysis for trading at different times. When the stock is overpriced, he could sell but it is only his trading skills that help him to analyze whether the stock can remain overvalued or get more overvalued. This helps him in holding on to his investments. According to Jhunjhunwawa trade and investment complement each other in many ways but they are two distinct compartments totally.

His philanthropy portfolio includes activities on nutrition and education for the country. By the year 2020, Jhunjhunwala decided to give away 25 percent of his wealth to charity. He contributes to St Jude, an organization that runs shelters for children affected by the deadly disease cancer. He donates his wealth to Agastya International Foundation and Arpan, an organization that helps create and raise awareness among children on sexual exploitation. Others included in his list of philanthropy portfolio includes Ashoka University, Friends of Tribals Society, and Olympic Gold Quest. He was in the process of building an eye hospital in Navi Mumbai, that will operate free of cost eye surgeries for 15,000 people.

Although Dalal Street’s big bull is gone, his legacy and success story in the stock market world will be remembered forever. In conclusion, Rakesh Jhunjhunwala’s story of success from scratch is really inspiring for new and old investors. Here is an amazing quote by Rakesh Jhunjhunwala. “Investors who are passionate, always make money through stock markets. You will never fail in any work in life if you do it with complete passion”, says Rakesh Jhunjhunwala.