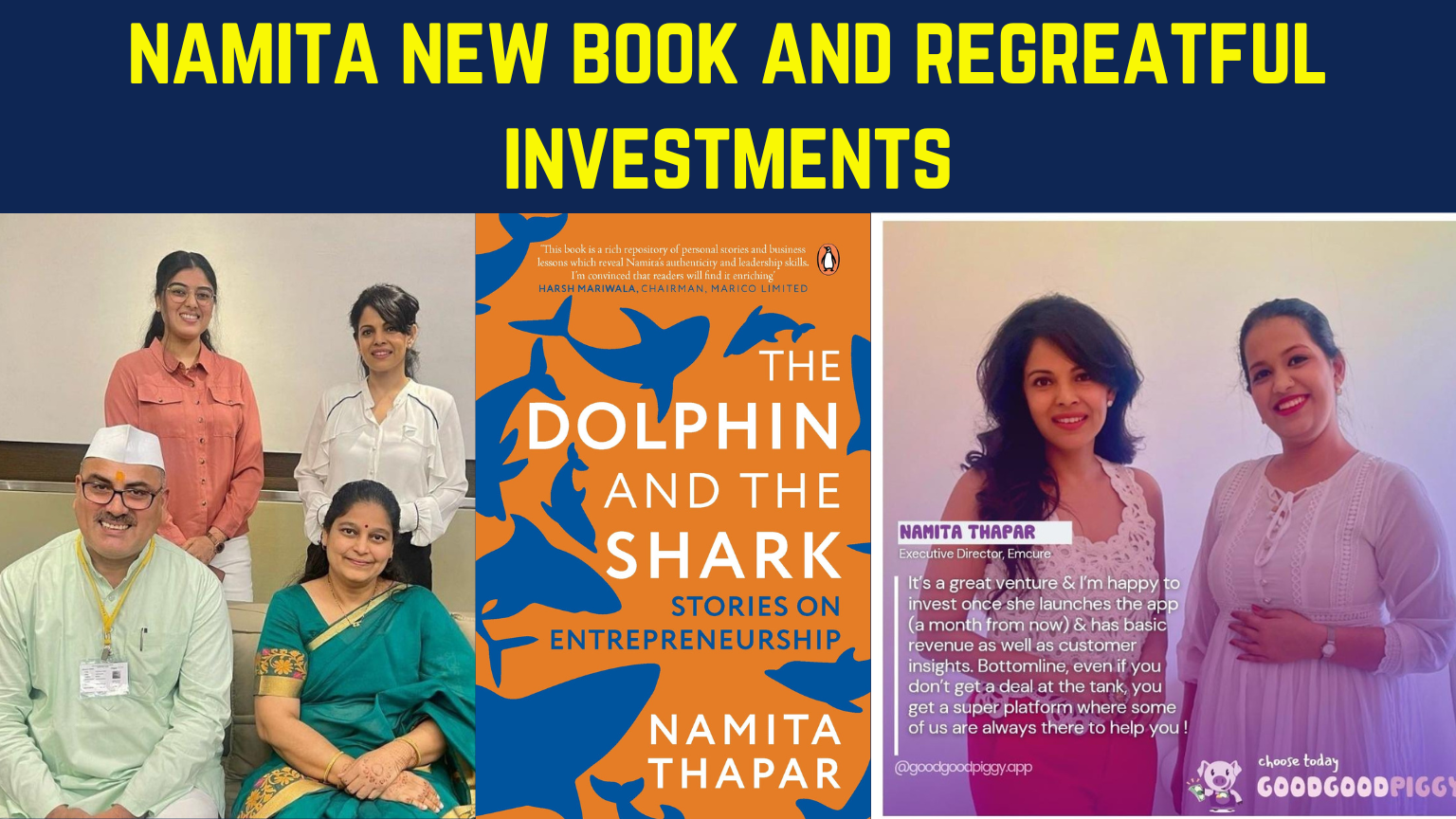 Born on March 21, 1977, in Pune, Maharashtra, Namita Thapar completed her schooling in Pune, Maharashtra, and then received her chartered accountant degree from the Institute of Chartered Accountants of India (ICAI) and also completed graduation from Pune University. Later, Namita moved on to Duke University’s Fuqua School of Business to get her MBA degree. Namita Thapar’s husband is Vikas Thapar. They have two sons named, Jai and Vir. Namita, Shark Tank India judge got more popularity. Namita Thapar joined Emcure as CFO, after her return from the USA. Subsequently, she took the responsibility to manage Emcure’s largest business unit, the India Business. 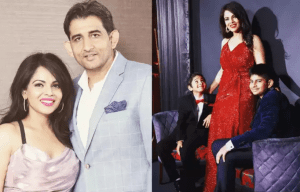 Namita Thapar Book: The Dolphin and the Shark: Stories on Entrepreneurship

The leading businesswoman and one among the ‘Shark Tank India’ sharks Namita Thapar very much made her debut as an author. She has come up with her debut book titled “The Dolphin and the Shark: Stories on Entrepreneurship”. This news was announced by Penguin Random House India (PRHI) on Saturday. The book was decided to be released in the month of August. Namita Thapar’s book is based on illustrations of the concepts of the age-old aggressor and invader leader role, the shark, and the more empathetic and compassionate style of leadership which is symbolized by the dolphin. The book will be published under PRHI’s business imprint under the name ‘Penguin Portfolio‘. 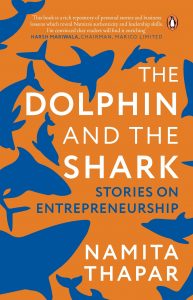 Namita Thapar’s father, Satish Mehta is the CEO of Emcure Pharmaceuticals. Emcure is a ₹7000 cr company and Namita Thapar’s net worth is a whopping amount of around ₹600 cr.

The book depicts various aspects of the entrepreneurial journey, from investing in various startups to guiding many budding women professionals and including them to be a part of the senior team for running a pharma company. The book claims to have lessons and experiences from all facets of the entrepreneurial journey of Namita Thapar, and this book is especially for those people who are seeking a positive drive and guiding direction for fulfilling their entrepreneurial ambitions. The executive director of Namita Thapar Emcure Pharmaceuticals gave a statement in one of her interviews that she has written the very first book ever, in her own words, words coming straight from her heart have been one of the most unforgettable and gratifying experiences of her life. She also said that she wrote the book which is not meant to be preachy in any way but rather she shared full of candid stories with the hope that it will inspire many people to push their limits to achieve their targets in life. 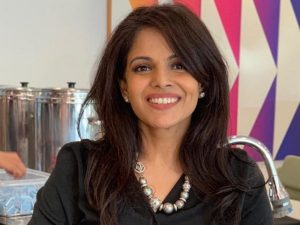 The book is sectioned into parts to address different focus points. The book focuses on starting one’s own business journey with helpful incidents and advice. This will help the budding entrepreneurs in making their pitch more perfect, building a great network for their business, understanding the importance and real worth of the culture of challenges, women leaders who break every barrier, and the role of mentors in shaping the path for entrepreneurs. Namita has interviewed many business pioneers. These interviews with business pioneers have added more value to these entrepreneurship lessons for others.

This line from my talk on womens day inspired the title of my book, The Dolphin & The Shark, March 8 th @Bajajauto (at Utsah, a 6.5 acre employee wellness facility, one of the best HR initiatives globally!) pic.twitter.com/6yRUNoeeZq

According to the publishers of the book, The Dolphin and the Shark is filled with many stories of entrepreneurs, some amazing snippets from the show Shark Tank India, and keen observations from very effectively managing her pharmaceutical company, Emcure. The publisher also said that Namita Thapar is a surprising person. Ever since his first meeting with her, she has left him in astonishment with her sheer commitment and full dedication to the book writing process and is an enterprising and consistently inspiring force as well. Radhika Marwah, the commissioning editor at PRHI said that they are extremely elated and proud to welcome Namita to the illustrious Penguin author family.

My book published in 5 months record time thx to @PenguinIndia, wrote 50000 plus words in 3 weeks – my sons 10th was a stressful time & I would sit next to him for hours, that’s when I finally found time to do something I’ve wanted to do my whole life 🙂 https://t.co/SthExb6FWe pic.twitter.com/ArWbJP5UuH

Namita Thapar shared very authentic and raw stories of her life like she shared painful experiences from her life, she talked about people who had influenced her in guiding and she also talked about concepts she wished to have 20 years back. The book tells about a dolphin that is sweet by nature and a shark, the ferocious and aggressive one by nature. The Shark Tank India judge and Emcure’s Executive Director Namita Thapar a few days back said that it’s very necessary to keep difficult people around us as it is important for personal growth. She also said that interaction with such difficult people teaches one patience. Thapar’s shark tank experience is also shared in the book. Namita took to her Twitter account and wrote, “Difficult people are also necessary for our personal growth. They prepare us to become more enduring as that is the best way to fight and overcome their aggression, by understanding how to stay calm no matter what in life. Thapar also further added that one should not stay quiet and instead speak to their own mind but make sure to do it calmly and rationally as it will give a much better outcome. In a similar thread, the Shark Tank India judge had said that objection and disagreement are one of the most important qualities of a good leader. According to her, it liberates creativity and innovation, and these qualities also define a good leader.

In one of her posts, Thapar also spoke out about why she thought of sharing her stories through her book. She said that the aim of sharing her stories, including some painful ones too, is not to gain sympathy or popularity or make it seem to people like she knows it all. The real purpose is to help people and even if it can help only one person to have faith in themselves in their toughest times, her mission will be accomplished.

Recently Namita invested in Good good piggy. This is an educational fintech company that came to Shark Tank India for investment but failed to get any deal. But time back Namita invested in the startup outside the show. The same is shared by the startup through their official social account. They wrote that they are elated to share the news that Namita Thapar has contributed her support in building and growing Good Good Piggy for the next generation of children and being a part of it. 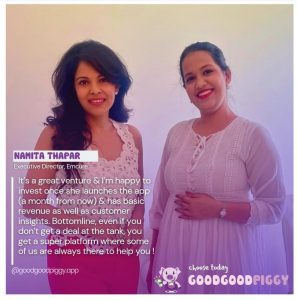 On this Namita said that it is a great venture and she is happy to invest in this once the startup launches its app, which is a month away from and has basic revenue as well as customer insights. She further said that the bottom line is that even if one does not crack any deal on the show, Shark Tank, one will get a super platform where some of the sharks are always there to help the budding entrepreneurs.

After Shark Tank India Namita Thapar revealed she regrets two things regarding her journey on the show. Through a social media post, Namita has shared the news of investing in one of the farmer entrepreneurs who participated in the show.

I regretted not investing in Pandurang Taware’s agri tourism venture & partnered with him post the show, this day at Baramati blew me away, Agri tourism promotes tourism, our culture, augments farmers income & must be supported & scaled, wish us luck !@agritourismind pic.twitter.com/2CfhE4OQ0J

Namita Thapar posted a picture with the family of the farmer entrepreneur along with a note. She revealed that later after Shark Tank, she regretted not investing in Jugaadu Kamlesh and Pandurang Taware’s startups. Namita further said that she has finally conquered her feelings of regret by investing in those businesses now. In the note shared by Namita, she also disclosed that agro-tourism is a strong cause that is close to her heart. Her note says,  “A positive start to my weekend. My two biggest regrets during shark tank were not investing in Jugaadu Kamlesh and Pandurang Taware. They are two incredible farmers who belong from Maharashtra. Today I have invested in Pandurang’s company and they are working towards a super cause that is quite close to my heart,  Agro Tourism. I am excited to partner and work with him to help pan India farmers to show the world beauty of our villages”! 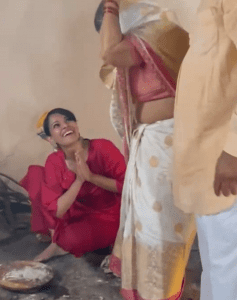 Kamlesh reacted to the post and dropped a red heart and fire emojis in the comment section of the post. Another fan wrote, “What an amazing gesture. Hope and wish that this inspires other investors to invest in the venture which is one of the most neglected industries of India. This is very inspiring. All the best to the team of Pandurang “. Another person wrote, “Great things. I had the same feelings during the show’s episode as it was needed for the development of India. At least any of the sharks could have invested and the pitchers were very loyal and humble during the pitch.”  Again another person wrote “More power to you!!”. An Instagram user appreciated by saying,”Wow…glad to know, loved their pure and they are working with such a pure heart. Great decision.. all the best,”.

Bravo! Great to see your involvement in promoting native Agri tourism. India which is "Bharat" expects much more from the top notch enterprineur to motivate the farmers and their families. It can be achieved only by being with them in their farms. Keep it up! હવે ગુજરાત આવજો!

Thapar is a recipient of various prestigious corporate awards and is recognized for her work. She is the recipient of awards like The Economic Times ‘40 under Forty awards, got  Barclays Hurun Next Gen Leader recognition, named in the  Economic Times 2017 Women Ahead List and received World Women Leadership Congress Super Achiever award.