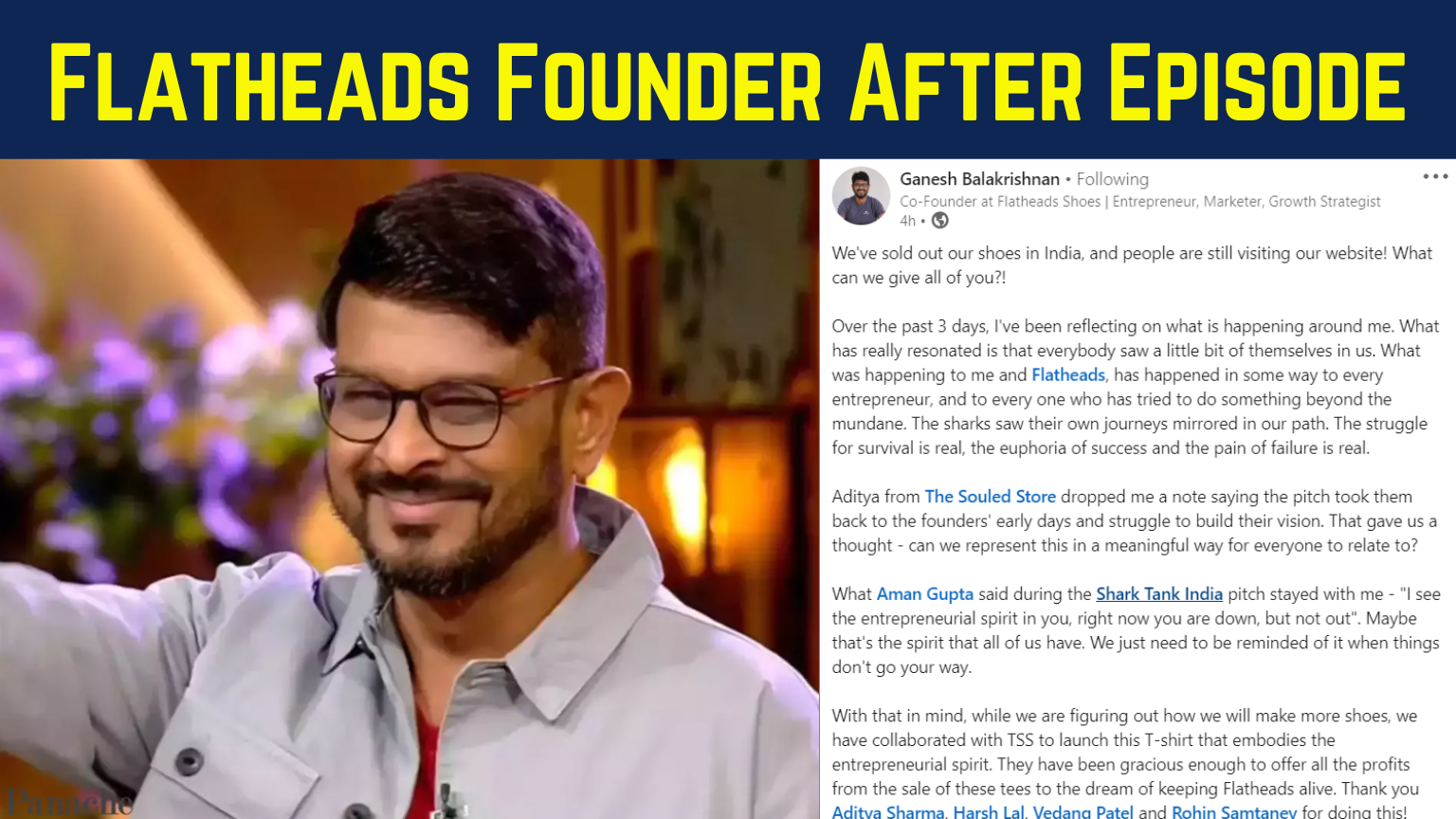 A new pitcher on the show has won the audience’s appreciation with his genuine and heart-melting story. In the latest episode of Shark Tank Indian Season 2, there came a pitcher named Ganesh Balakrishnan who had come to raise investment for his organic shoe business named, ‘Flatheads’.

While presenting his pitch, Balakrishnan broke down and tears rolled down as he shared his story with the sharks. He said that if he failed to get funding for the show, he was on the edge of shutting down his business and looking for another job. He also revealed that even after getting a job, he would definitely find ways to bounce back on his feet and restart his business with fresh ideas.

Ganesh Balakrishnan penned a heartfelt note, “Down, but not out.”

Ganesh shared a post on his LinkedIn account. He says, “To be honest, I was dreading the airing of the Flatheads pitch on Shark Tank India. Breaking down on national TV isn’t exactly great for one’s self-confidence ?. What I definitely didn’t expect is the episode to be received the way it has been, and it is very very heartening to see that people are applauding the entrepreneurial spirit – of all startup founders, with me as a proxy ❤ .”

All his inventory in India sold out, people extended support

Ganesh revealed people have been really kind towards him. After the episode was telecasted people showered love and best wishes to him. He says, “We’ve almost sold out our inventory in India, so pardon us if you aren’t able to find your size on www.flatheads.in. Would be amazing if you could tell your friends in the US and UAE to try our shoes.”
After watching the episode, from online sources people quickly jumped on the Twitter comment section in order to support the entrepreneur and his business. Users started posting their supporting messages for the entrepreneur by using the hashtag “flatheads.”
One Twitter user wrote, “The story of flatheads was so sad and yet so inspiring, Ganesh Balakrishnan was amazing… hope something good happens with the venture and #Flatheads became one of the major brands. I loved their product wishing in future to be their customer.”
Another user says, “What I just saw is very Inspiring, amazing, out of words now ! The “Courage” And the confidence you just showed For your Ambitions are appreciated.”

Here’s the story of Flatheads founder. Who is Ganesh Balakrishnan?

Ganesh Balakrishnan is an IITian from Bombay. He later completed his MBA and worked for the corporate world. He has worked with many brands. Over the last few years, he made three companies, but unfortunately, none of them were successful. Ganesh Balakrishnan told the Shark Tank judges that he founded Flatheads shoes company in 2019. But just then the pandemic hit and his shoes could not grip the market as no one bought shoes during the pandemic. He told them that he had the ability to lead companies but luck didn’t favour him.

Balakrishnan’s daughter is a fan of Vineeta and Peyush

Flatheads founder thanked all the sharks and the Shark Tank India team for giving him the opportunity to present his pitch. He offered special thanks to Vineeta and Peyush as he managed to bag a deal from both. He wrote,” And by the way, did I mention that my 10-year-old daughter wants to be an entrepreneur? She says she is a fan of Peyush’s no-nonsense mindset, and I know that she admires Vineeta for her cheerfulness and positivity. She is super proud that I managed to get an offer from both of them!”

The most talked about Shark Tank India pitch on the Internet, Flatheads

Flatheads is a startup company that manufactures breathable and light shoes that suit the Indian weather. The products are made using sustainable materials such as banana fiber, linen, bamboo fiber etc. The MRP of these shoes ranges from Rs 1000 to Rs 5000. Ganesh revealed to the sharks that although his company had been making a good amount of sales, they were not having a profit from it. He said he is running out of working capital now and has to use his own money to run the company. He said he had used his personal capital of about Rs 35 lakhs. Ganesh stated that if do not get any deal, he may have to shut down the company. Saying that, Ganesh got emotional and tears rolled down. Sharks also get emotional and Vineeta seems to be affected the most.