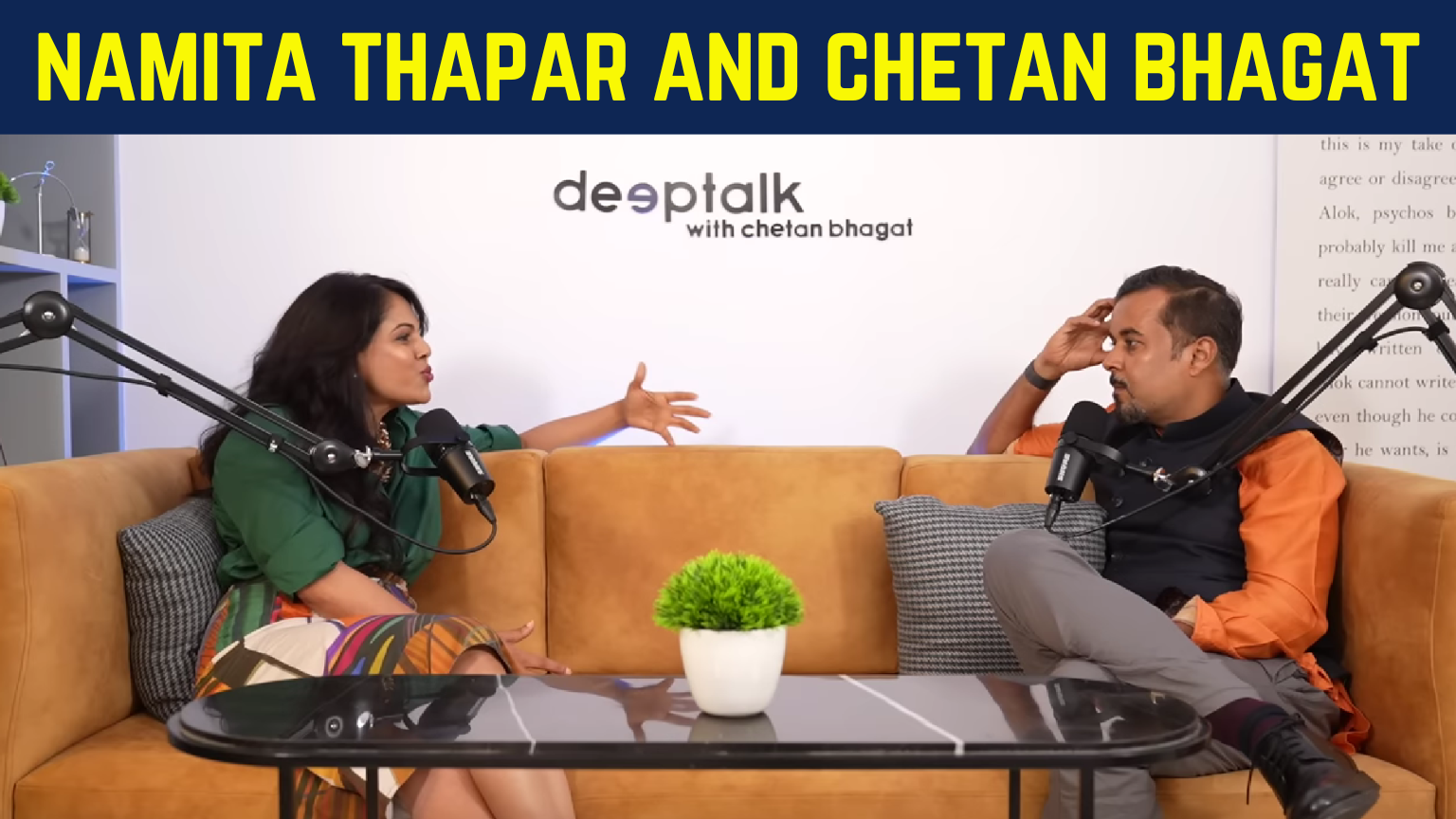 In this interview Chetan Bhagat, Namita Thapar shared her experiences in personal and professional life. This blog is about her drive to take up challenges in life, transition stories, children’s mental health issues, and some more.

Starting with the conversation, Chetan revealed his first impression of Namita. He came to Shark Tank India for Anupam Mittal, who is a friend of Chetan. And several months before Shark Tank India, he had told Anupam that he will be a great shark if the show ever happens in India. He said to Namita,” I came to Shark Tank India for Anupam but stayed for you”. Namita was flattered listening to this. “Namita is soft-spoken yet dominates the conversation”, said Chetan. Namita feels Chetan got this correct as she was known to be a bully at times. So who is the real Namita, the sweet one or the dominant one? Namita replied that she has a very stressful life so to destress it and have a down time, she uses Instagram. 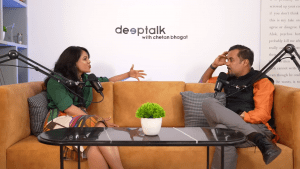 Chetan Bhagat asked Namita Thapar about Emcure, and Namita told more about it. Emcure Pharmaceuticals was started by her father Satish Mehta. He graduated from IIM Ahmedabad. Emcure high-level numbers. Emcure Pharmaceuticals is a 7000 cr company, present in over 70 countries, working with more than 10 thousand employees. She didn’t open about valuation, as the company is considering an IPO, and has a private equity player. Namita managed the Indian business of Emcure which is 2000 cr. Chetan Bhagat asked her about how she manages this huge ship of business. Namita said that she is passionate about her work. The bottom line is that 80% of one’s life is about work. One should love and be passionate about their work, otherwise will end up being miserable person in the end. Namita was born in Pune and did schooling in Vidya Bhavan. She has a Chartered accountant degree along with a bachelor’s degree in commerce. She completed her CA exam on her first attempt at the age of 21, Namita recalls this as one of her proudest milestones ever. She says, “I worked hard, I was lucky and I got the results”. On asked about their daily schedule of Namita during her CA exam preparation days, she replied that she has a busy and rigorous schedule. For those four years, she had to work hard. Namita Thapar’s father gave her a name, called ‘munimji’ as she has a habit of making accounts for everything. She believes that one should keep on acquiring knowledge, one should be a lifelong learner and she always enjoys these nerdy things. She comes from a highly educated family background. She also talked about the change in parenting style over these years. Namita has a deep desire to go abroad. She belongs to a conservative Gujarati family. So she wanted to go abroad, live alone and make her own money. Namita Thapar went to Duke University to do an MBA.

Changes in Namita after Completion of her Education

After education, she worked in GlaxoSmithKline and later in Guidant for six years. Namita said that she couldn’t even do basic work abroad. She also opened up about her being an emotional eater for the last 30 years of her life. Namita accepted that she was also conservative and traditional way back then. She believes that each person should assess their personality and figure out what works for them in managing both work and relationships. She prefers to fulfill her ambitions and career over getting married at that early age. She wanted to enjoy her single life more before getting married. 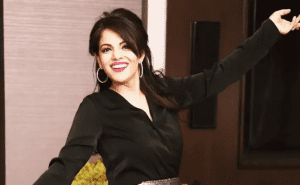 Namita said that sometimes seeing her strong opinion, and her way of talking and dressing people believe that she was always like this and never had challenges in life. But she talked about it. She told me that when she was a kid, she was very overweight. She had a lot of facial hair and acne. She was body shamed a lot as a teenager. No guys looked at her, instead, she had secret crushes over them. And body shaming a teenager to a great extent leaves scars. Namita recalls that there was not one in her class who used to call her “the girl with moustache”. She used to feel extremely ugly and had very low self-esteem. The first time she liked herself was when she became a chartered accountant. She was brought up with nine other siblings. They all used to stand first in class except Namita. Namita came second in her class but was never congratulated for this. As a kid, she always used to judge herself in terms of looks and mark sheets. She would lock herself in the bathroom and cry as she felt as dumb, and unattractive, she felt her father didn’t love her enough. While crying she would think about what else she can do to change her situation. She gave advice to teenagers that life is beautiful and one should not let external labels define them. She believes that these tough times have made her more kind and empathetic. She wants to talk about these so that people realize that everybody has mental health issues, everyone goes through rough times but everyone can conquer them. 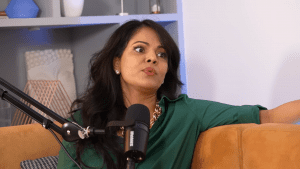 Being in anxiety, people can’t think straight. They tried self-punishing and lived in guilt. She explained that if she had counselors at that time who had helped her to get out of a terrible situation then she could have created beautiful childhood memories. In Emcure a big part of life is working with the top neurologist and psychologist. She does a lot of doctor advisory boards. She has not only gone in-depth about mental health areas but also sells 17 therapeutic areas. She defined her self-worth based on labels.

Chetan asked Namita about her definition of success. To this Namita explained, that when she was a young success to her depended on labels and people would love her based on that. But over these years and at this age, she doesn’t let people and labels define her worth. Namita Thapar even did Shark Tank India to spread the message of entrepreneurship as she had seen her father’s struggles as a first-generation entrepreneur. ‘To be more productive and to achieve more one needs to get rid of external noise and be more inward-looking”, says Namita.

Namita expressed that she is a huge fan of Amitabh Bachchan. After the release of Sholay, she liked the name Vir and her first son was named after it. And the second son was named Jay. She has tremendous love for Bollywood. Over this she said, people have set certain stereotypes for business people. “Business people can be extremely aggressive, serious, and brilliant when it comes to work, but at the same time they can be funny and have a blast as well”, says Namita.

Namita's life always revolved around studying until she got to work and married. After marriage it was for the first time that she was not studying, so she had time for herself. She took this as a challenge and lost 25 kilos. For this, she joined trekking, and kickboxing did yoga, learned cooking, and most importantly started to eat the right way. She did a lot of makeover and hard work in terms of facial appearance and clothes. The driven quality in her made her do this. She took this transition as a challenge and this filled her void. She went through tons of fashion magazines and visited various stores, etc. She believes everyone should be the best version of themselves in every aspect of life. People need to commit and do self-talk to bring change in themselves.

Namita Thapar's first book, " The Dolphin and The Sharks"

Initially, Namita Thapar started by writing a few columns every month on various topics. But by the time the fifth chapter came out she liked what she was writing. It was authentic and raw, she shared painful experiences in her life, people who had influenced her, and concepts she wished to have 20 years back. Namita says, "People don't want Gyan, people want stories". So she wanted her book to be a book of stories, stories about her, stories about Emcure, entrepreneurs who have influenced her, and stories of Shark Tank India. The book tells that one can be a dolphin, the sweet one, or one can be a shark, the ferocious and aggressive one.

Buy DOLPHIN AND THE SHARK

Namita Thapar's Last Advice to everyone Listening to her Out There.

Namita Thapar quoted the beautiful six words, "Be you the world will adjust". She feels the statement is so powerful. She explained it, if you can be yourself and love yourself truly for who you are even knowing the fact that you will commit mistakes, keep learning and get better, then the world will automatically adjust and one will not need any external validation

The interview ended with their last thoughts of Namita. She seems to fully enjoy this conversation with Chetan.

Watch the Full Interview Of Namita Thapar With Chetan Bhagat