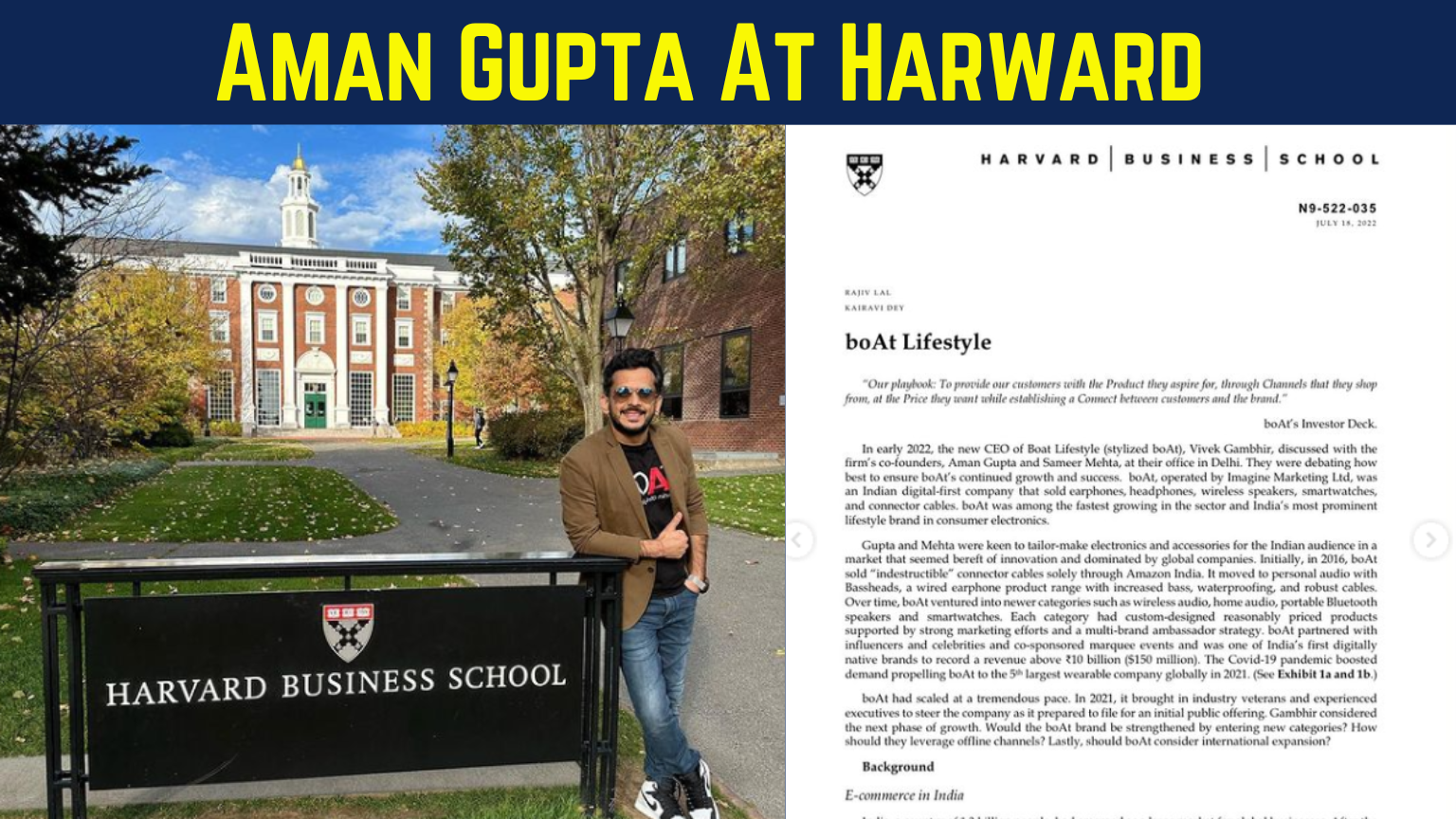 He is the co-founder and chief marketing officer of leading the brand BoAt. boAt is an India-based consumer electronics brand that mainly focuses on audio technology headwear wearables. He has also appeared as a Shark in Shark Tank India season 1.

“What if I could not go to Harvard? Our work and company have made us reach here.” Aman Gupta, co-founder of boAt lifestyle

Aman Gupta, co-founder of boAt and judge on the television show Shark Tank India, serves as an example for many budding business owners. His entrepreneurial experience serves as an illustration of how persistence eventually pays off. Shark Tank India season 1 shark Aman Gupta shared the success in an Instagram post on Tuesday and included a tonne of images from his trip to the esteemed business school. He was accompanied by Sameer Mehta, the co-founder of boAt. The team engaged the students in an interactive session as well. After the institution published a case study of its brand, Gupta talked about his experience visiting Harvard. Gupta stated in the touching post, “What if I could not go to Harvard? Our work and company have made us reach here. We are thrilled to announce that boAt was the subject of a case study written by Harvard Business School. Sameer and I discussed the case that was presented to the students with the professors while we were here today talking to the students. Researchers from the Harvard Business School Rajiv Lal and Kairavi Dey wrote the 36-page case study.

The case study describes boAt Lifestyle as "one of India's first digitally native brands to achieve a revenue in excess of $65 million and the fifth largest wearable firm in the world, producing audio electronic items. Like many business owners, Aman has studied from a number of case studies produced by the Harvard Business School and hopes this case study will now greatly benefit kids everywhere in their learning and development. Over 1.6 lakh people liked Gupta's post in less than 24 hours. An Instagram user commented on it and said, "@boatxaman Now, you don't hear much about an Indian brand like this. Best wishes, Sir Ji.

Shark Tank India was a business-based reality show. The budding entrepreneurs pitch their ideas to the sharks to get the best deal and investment. The show debuted last year. After getting an overwhelming response, the show is returning with another new season. As per reports, Aman Gupta will be seen as one of the judges in shark tank India season 2.

Who is the new Shark In Shark Tank India Season 2?

What is the Net Worth of Shark Tank India season 2 judge Amit Jain?